“Music acts like a magic key, to which the most tightly closed heart opens.”
― Maria Augusta von Trapp

William W. Brueggemann is a composer, arranger, podcaster and performer who's passion for melody has ignited the imaginations of people around the world. As a composer he is highly versatile, writing in a staggering number of styles from orchestral, choral, piano and other concert works to musical theater, pop music, chiptunes and film scores. William's music is infectious, memorable, emotional and always highly expressive. 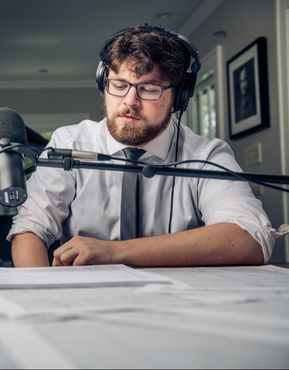 William is co-host of the Super Marcato Bros, a bi-weekly video-game music podcast that discusses and analyzes the very best in game music from all generations and argues the validity of video-game music as an art form. For years under this moniker, Will along with his brothers Karl and Marty have composed the scores for several games including 'Battletub,' 'Askr' and 'Nyanroo The Supercat' as well as over 20 albums of original music, many of which pay homage to specific video-games from the past. The Super Marcato Bros. are frequently asked to give lectures on  the history of game music as well as its many influences, speaking at conventions around the country like MAGfest in Washington D.C. and Gamer's Rhapsody in Minneapolis. William's original music has been featured in Game Informer Magazine as well as MPR's 'Top Score' with Emily Reese. In addition to his video-game work, William has written short film scores and concert music, some of which has been performed internationally. In 2016, his piece 'Taking Flight' was premiered by both the UMD Symphony Orchestra and Wind Ensemble. Later that year, his piece 'Path To Home' (finalist in the 2015-16 Choral Project Composition Contest) was performed throughout Europe during a multi-city tour of Austria and the Czech Republic with performances in such historic locations as The Church of St. Ignatius in Prague and St. Peter's Church in Vienna. In 2017 his piece 'Reunion' was performed at the Ordway Center For the Performing Arts, making it one the first Hmong choral pieces ever performed in the world.  Recently, William's song 'Take a Stand' was selected for the Justice Choir Songbook and will be performed in a series of concerts for justice throughout this upcoming year. William's new opera: 'Osseo, Son of the Evening Star' was premiered in December 2017 as part of the UMD Opera Scenes program. In January of 2018, William's musical score for the UMD stage production of 'Antigone' was recognized at the Kennedy Center American College Theatre Festival and honored for Achievement in Original Composition. In 2019, Will formed the soul/pop duo Ember Willow with his wife and musical partner Emma. Their debut EP 'Spell of Someone' is available on iTunes, Spotify, and Apple Music.
Born the youngest of four children to a highly musical household in St. Paul Minnesota, William has been singing as long as he has been speaking. Among his earliest signs of musical aptitude were his ability to improvise harmonies at age 4 along with a highly acute ear for pitch and melody. Throughout his childhood and adolescent years, Will's love and appreciation of music was fostered by an introduction to a wide variety of songwriters and composers from the Beatles to Beethoven and from John Willliams to Ben Folds. Even from an early age, he was an avid fan of film music, humming themes from 'Star Wars' and 'Superman' and was brought to tears by the score to Laputa: Castle in the Sky. As a boy William was also quite obsessed with music from video-games, singing tunes from Sonic the Hedgehog, Starfox, Metroid and especially the melodies of Koji Kondo, who's inspirational work for the Legend of Zelda, and Super Mario series continues to influence his devotion to the power of melody.

As a child, William was instructed in piano, trumpet and voice. His voice would continue to serve as his primary instrument, the result of which is a vocal, 'song-like' lyricism that is present in much of his music. Will's earliest pieces were composed through singing and eventually, as his piano proficiency developed, his compositions became more and more ambitious and elaborate. Quickly his ideas grew to include arrangements with full orchestral compliments among other things. Throughout his high school years William continued to compose and received performances of his choral and orchestral music. He also continued to develop his skills as a producer/engineer, creating and manufacturing his own recordings. In 2012, at the age of 16, Will began the Super Marcato Bros. Video-Game Music Podcast with his brother Karl. What began as a simple experiment of recording their conversations about game music, quickly became a regular show with a rapidly growing fan base.

The podcast was not only an outlet for his newly forming musical voice but an incredible learning experience as well, leading to a myriad of exciting opportunities and challenges, including his first professional experiences as a composer.  While the Super Marcato Bros. continued to develop their identity as podcasters, the brothers also began to build up a body of original music as well. With a series of tributes to their favorite game composers, albums like 'Of Cosmic Proportions,' 'Mega Buster,' 'Dear Mario' and 'Child of the Chozo' explore and pay homage to the musical worlds of Super Mario, Megaman and Metroid alike while writing new music and composing original melodies.  These projects challenged William both compositionally and technically while expanding his audience and bringing attention to his other work.

By the end of high school, William had written seven pieces performed by large ensembles, composed the scores to three independent video-games, created six albums of original music, recorded over 130 podcast episodes, interviewed seven professional composers and performed as a lead in five different musical theatre productions. In the summer after high school, he helped produce a show for the Minnesota Fringe Festival. '﻿﻿FireFlower, An Original Musical Comedy﻿﻿' was a 1980's video-game come to life in a the style of a golden era musical. Will not only starred as the villain and producer but he created the entire musical backing track, coding the notes of each piece into the hardware of an old NES game machine. FireFlower was a smashing success and broke new ground as the very first musical to ever use an 8-bit underscore!
In February of 2017, William along with his brother Marty launched UnderScore, a new weekly podcast on film music that utilizes a non-uniform format to analyze some of the most celebrated scores of all time. Each month their analysis culminates in a feature length audio commentary to accompany the movie and discuss the score in context with the complete film. UnderScore has interviewed esteemed composers in the world of media-scoring including Joe Kraemer (M:I:Rogue Nation, Jack Reacher,) John Lunn (Downton Abbey, Grantchester) and Conrad Pope, the film score legend who in addition to composing, has orchestrated for virtually every notable composer in Hollywood (John Williams, Hans Zimmer, Alexandre Desplat, James Newton Howard, Danny Elfman, etc.) Expanding upon their network of shows, the marcato brothers podcast network continues to grow, welcoming new podcasts and broadening their audience.

William studied composition under Dr. Justin Rubin (BMI) at the University of Minnesota Duluth where he graduated    Cum laude with a Bachelor of Music Theory and Composition degree. As a part of the program at UMD, William received rigorous training in voice, piano, organ as well as counterpoint, orchestration, tonal harmony and composition. William has been the recipient of two UROP Grants awarded by the University of Minnesota, the most recent of which has provided the funding for a chamber opera called 'Osseo, Son of the Evening Star' which was performed December of 2017. William composed an original score for a UMD stage production of 'Antigone' in Fall of 2017 which was selected to perform at Region Five of the Kennedy Center American College Theatre Festival in Des Moines. In his senior year at UMD, William was commissioned by his university to compose an orchestral anthem for the school which was featured in a 2018 UMD Institutional Television commercial around the Midwest. This project was been documented on film as part of a documentary detailing the processes of composing, orchestrating, rehearsing, recording and mixing the completed piece. William also composed an original score for a short film entitled: 'Husband, Ensured' which debuted in a Chicago regional film festival in 2018. After finishing his undergraduate degree, he continued his career in the Twin Cities where he performed with the VocalEssence choir, and served as Organist and Director of Music at Luther Memorial Lutheran Church in South Saint Paul.

William continued his studies as a graduate student in the MFA Music Composition For The Screen program at Columbia College Chicago, under the direction of Kubilay Uner (Force of Nature, Big Sur, American Traitor: The Trial of Axis Sally). As a masters student, he also studied with composers like Kazimir Boyle (The Last Champion, Mercy Black, The One and Only Ivan), Joel Corelitz (Eastward, Halo Infinite, Hyper Light Drifter), Ceiri Torjussen (The Canal, Primal Rage, The Thing That Keeps You) , Lolita Ritmanis, Michael McCuistion & Kristopher Carter of Dynamic Music Partners (Batman The Animated Series, Teen Titans, Young Justice), and Jonathan Thomas Miller (1000 Ways to Die, Life Below Zero, Jay Leno's Garage). While attending Columbia, he established relationships with filmmakers as well as other rising composers like David Neville, whom he collaborated with on an Orchestral, Americana score for 'The W.A.S.P.', a short film based on the true events of the first Asian-American female pilot who served in the U.S. military. Among the colleagues and friends made at Columbia, was the internationally renowned violinist/singer-songwriter and winner of the Eurovision song contest, Alexander Rybak. Together, William & Alexander collaborated on a score for the post-apocalyptic animated film 'Distant Sun', directed by and produced by a team of students from the Columbia Animation Program. In the final semester of the MFA program at Columbia, as a part of the graduate thesis requirements, William composed an orchestral piece titled 'Beckoning To The Great Beyond' which was performed by a Hollywood session orchestra at the 20th Century Fox Newman Scoring Stage, under the engineering and mixing mastery of the legendary Dennis Sands (Back to the Future, Forrest Gump, Avengers: Endgame).

Currently, William works as the Composer Assistant for Mark Isham (42, Judas and the Black Messiah, The Nevers, October Sky, A River Runs Through It, The Unbearable Weight of Massive Talent.)